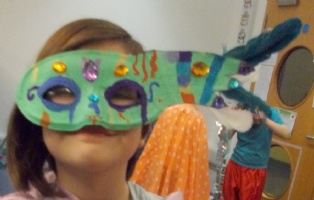 On Wednesday 3rd April the whole school were involved in our Mardi Gras procession which was linked to our topic Rio de vida.

Maple and Hazel class had spent all term planning our outfits and our large bird that we wanted to parade around the school alongside our visual artist Rachel from The Valuing voices project. We made masks using Papier-mâché and adding feathers, sequins and painted parts of them too. We learnt different printing techniques involving low cost materials such as string, washing up sponges and plastic margarine tubs. We used a portable speaker as we danced around the school ( which involved some Samba moves that we had learnt in class!) and the IT team set up more music around the school so the whole school could be involved. We even had some of our media students involved in videoing and photographing the pupils.

It was an amazing, fun filled, colourful event and was made extra special by the whole school being involved, all pupils were so engaged and were smiling and laughing all afternoon. Big thanks to the music students who played to us as we came past in the Mardi Gras styled music and followed the last pupils back to their classes.

Thank you to everyone involved for making our idea a reality.